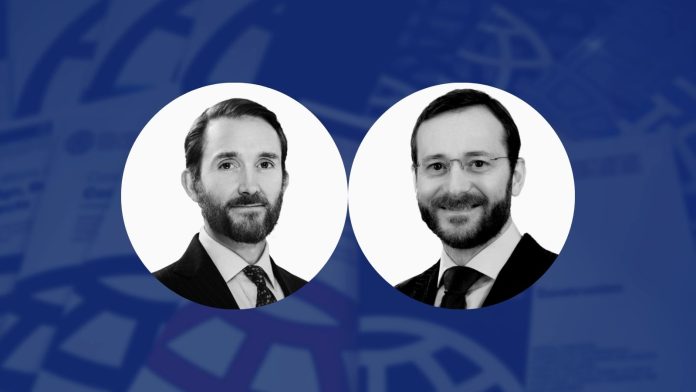 The infrastructure sector is facing unparalleled challenges right now. Or is it? We sit down with Pinsent Masons partners Nicholas Brown (NB) and Sam Boyling (SB), who point out that old legal clauses have made an unexpected comeback and others have been adapted to new conditions against the backdrop of high inflation and global instability.

IG: 2022 drew extensive attention to geopolitical insecurity and turmoil while inflation also rose dramatically. As we enter 2023, how is the legal side of things adapting to help mitigate the impact of disruption to infrastructure projects?

NB: “More often than not, we see it in the rear-view mirror when something has gone wrong with the handling of a disruptive event. So, let’s take conflict. Ukraine is widely talked about, but it is just one of three recognised regional wars in the world right now, along with Myanmar and Ethiopia.

“Now, Ukraine was probably foreseeable, but it was not prepared for. So, supply chains, fuel and materials have been hit by embargoes, by Russian interference with trade, and by global responses to the invasion. And because there was little anticipation, the responses have been developed on the spot.

“That was true in Myanmar too, where several international infrastructure projects were underway before the military junta seized power there. Those clients and developers had made no provision for the consequences of something like that cutting money flows and cancelling their projects.”

SB: “It’s the same in Ethiopia too. We are presently submitting papers on a project cancellation there due to the stress and strain caused by civil war, which in turn causes costs to rise and so on. And Nick is right about the lack of anticipation on wider issues too.

“If we look at inflation, we are seeing the old ‘rise and fall’ clause making a comeback from the ’70s and ’80s to deal with rapid price changes in materials. This is real ‘back to the future’ stuff. We are seeing elaborate drafting to deal with price changes between the contractor’s bid and the work getting started. In other words, the owner needs to get to financial close fast because the contractor is going to use a piece of equipment that, 12 months later, will simply cost 20% more to deploy.”

“Past projects in land-locked Uganda often included Tanzania within Change in Law provisions because materials came through Tanzania’s ports. The only difference now is the larger distances.” Nicholas Brown

IG: Does this mean a revival of old clauses is part of the solution?

SB: “Partly. With Covid, people dusted off textbooks on Force Majeure and ‘Change in Law’ clauses. But what’s interesting is how those clauses have changed. Change of Law was always assumed to relate to the host country. But we are so interconnected with global supply chains that I’m seeing post-covid Change in Law provisions that define ‘responsible authority’ very broadly, not just an authority in the country where the project takes place. It could be any country through which supply chains operate.

“That means clauses reflect the reality of the situation. A change in law in Taiwan can impact on projects in Tanzania, and it’s funny that industry didn’t already have that in place before – because this isn’t new either. Past projects in Uganda often included Tanzania within Change in Law provisions because Uganda is land-locked and materials came through Tanzania’s ports. The only difference is the larger distances now. If Shanghai closes its ports due to Covid, that can impact on projects globally.”

IG: Won’t there be difficulties with the clauses being interpreted so widely?

NB: “There are real challenges, yes. But there is real experience behind legal contracts too. Take the FIDIC contracts. Their most recent versions were drawn up before the pandemic or recent geopolitical instability, but they were drawn up and revised competently by past generations that experienced World War Two, cold war conflicts and the 1970s oil shocks – so they have pretty sophisticated risk settings.”

“Even the change from ‘Force Majeure’ to ‘Exceptional Events’ hasn’t disrupted that balance. And that is the general relief clause for disruptions. So FIDIC has broadly got it right thanks to decades of experience and evolution. But it is interesting that from January 2023, FIDIC has expressed that exceptional events should not only satisfy the specific tests, but also be genuinely ‘exceptional’. That is a substantive change, but that sort of evolution is exactly how contracts have improved throughout the years.”

“Take battery storage – consumer sectors have the most extensive knowledge of battery technology and the materials supply chains involved. So they are finding themselves drawn into infrastructure projects”
Sam Boyling

IG: But is there a risk that such wide-spread cross-border impacts may make disputes harder to resolve when a project falters?

SB: “Maybe. We do see a lot of new and different participants, often at supply chain level. We see suppliers who made their name for over 50 years by making coal fired boilers, now turning their hand to building solar parks.

“Those firms are in effect new participants and they may also be working with partners who have even more distinct experience. Take battery storage – consumer sectors have the most extensive knowledge of battery technology and the materials supply chains involved. So they are finding themselves drawn into big infrastructure projects because of that.

“That type of change in the market with companies doing such new things alongside such new people, does add additional risk.”

IG: With some very diverse, often new entrant participants, is there a role for DAABs to help ease the path somewhat?

“However, one of the other things I noted was the concept of deal mediation. Now, deal mediation has its origins in corporate transaction rather than infrastructure. The concept is that when negotiating parties are getting into the detail of risks, they can hire a neutral mediator to assist them to understand what they are getting into and to help work through solutions for the parties.

“The DAAB forms when the contract is entered into, so the risk allocation is already in place by then. It can offer informed assistance but deal mediation has something about risk awareness, anticipation and mitigation within the confines of the deal and I think perhaps the infrastructure sector should explore it.”

Nicholas Brown works from London across the Asia Pacific, the Middle East, Africa and Australasia, including as counsel in international commercial arbitrations. You can contact him at [email protected]

Sam Boyling specialises in Asian construction and engineering legal services and is based in Singapore. You can contact him at [email protected]