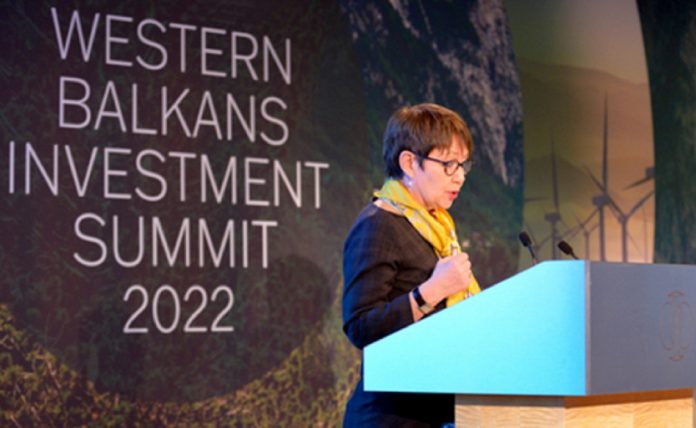 Opening the West Balkan Summit , Odile Renaud-Basso tells governments that among many priorities, exiting coal sustainably and securely should now be the number one priority.

Speaking at the 5th biennial West Balkan Summit in London, the European Bank for Reconstruction and Development (EBRD) told the region’s governments that among the many priorities for Balkan states, exiting coal must now be the number one priority.

Against the backdrop of war returning to Europe this week, leaders of the six Western Balkan nations have come together in London for the 2022 Western Balkan Summit to discuss economic development, trade and sustainability spanning a region so damaged by its own wars in the 1990s.

Opening the event attended by the political leaders of all of the region’s countries, president Odile Renaud-Basso stressed: “Decarbonisation is critical for the Western Balkans. Every government should have as its number one priority a plan to exit coal, affordably and without compromising energy security.”

Progress is already underway in this regard, with innovative projects in the region that include floating solar farms on hydropower reservoirs, alongside more conventional investment programmes underway, such as renewable energy auctions.

Ms Renaud-Basso explained: “We are working across the region to support countries in implementing renewable energy auctions. The first auctions have already delivered the cheapest solar power ever seen in the region and we are expanding our support to cover more countries and greater capacity.”

The summit was created to highlight potential investment and business opportunities in the Western Balkans region and to promote regional and cross-border collaboration and projects. This is the fifth summit of its kind, following the inaugural Western Balkans Summit in February 2014.

The EBRD is one of the largest institutional investors in the region, with €15bn invested to date, and around €1bn more now being invested every year.

The six leaders of Albania, Bosnia and Herzegovina, Kosovo, Montenegro, North Macedonia and Serbia each set out their overall vision for the region at the conference every two years, along with key regional projects and opportunities for investment at both regional level and in each of the countries of the region.

Dr Nelson Ogunshakin OBE, CEO of international engineering federation FIDIC, welcomed the themes of the summit. He said: “Bringing national leaders together with global investors is vital to achieving real progress in tackling cross-border challenges. Chief among those challenges is decarbonisation and the focus on energy sustainability and security at the summit – along with strengthening growth and digital capacity – can help to expand the innovation and progress starting to emerge there.”