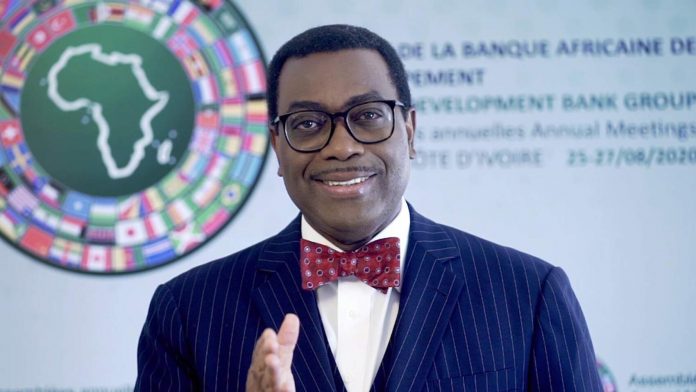 Dr Akinwumi Adesina has told an audience in New York that huge opportunities for growth in Nigeria and Africa risk being held back by debt and climate change.

Speaking with investors at the a side event at the United Nations, African Development Bank (AfDB) president Dr Akinwumi Adesina has suggested rapid growth and success is possible in Nigeria and Africa but needs greater international engagement.

Adesina said. “Investors must recognise this and invest. That’s why the African Development Bank, together with the Islamic Development Bank and the French Development Agency are investing $618m in the Digital and Creative Enterprises Program (I-DICE) in Nigeria.”

That funding will support the creation of 225 creative start-ups and 451 digital technology small and medium sized enterprises, creating more than six million jobs and adding $6.4bn to the Nigerian economy. This runs in parallel to the growth of tech start-ups across the continent, which has increased threefold to 5,200 companies, half of which are fintech specialists.

At the same time, Nigeria has shown that large scale projects in Africa can pay dividends. Adesina explained: “The newly constructed $19bn Dangote petrochemical and fertilizer complex – the world’s largest ammonia plant – with new deep seaport, is exactly the kind of massive infrastructural and industrial manufacturing that is needed to make Nigeria a regional and global player in gasoline, diesel and aviation fuel, and fertilizer value chains.

However, echoing recent comments by the Governor or Lagos, Adesina warned that progress remains challenging, saying “Roses come with thorns. Nigeria’s economic and growth potential roses have a few thorns, but those thorns should not discourage us.”

Rising debt levels
Adesina warned that debt has returned as a hindrance to Africa’s development, saying “African countries are facing a huge debt challenge, due to a confluence of factors, especially Covid, climate and the Ukraine Conflict – what I call the 3 C’s. The solution to them is simple: 3 F’s: Finance, Finance, and Finance.

“Financing is critical because debt to GDP ratio of Africa has increased to 70%. Several countries are at the risk of debt distress due to unsustainable debt levels. Nigeria total debt level is N42.84tn or $103bn. External debt level stands at N16.61tn or about $40bn.”

To resolve this, Adesina therefore added his voice to African heads of state calling on developed countries to act.

“The call of African Heads of State and Government for developed countries to rechannel an additional $100bn SDRs to Africa will go a long way in helping to reduce the debt burden. Allocated SDRs through the African Development Bank, as called for by the Heads of State and Government, will be leveraged by four times by the Bank. This will deliver more financial resources for Nigeria and other African countries.

“Nigeria and other African countries need debt relief. They cannot run up the hill carrying a backpack full of sand.”

“Africa, which only accounts for 3% of total carbon emissions, suffers more from the negative effects of climate change. Africa loses $7bn to $15bn a year due to climate change, which will rise to $50bn per year by 2030. Africa needs at least $125bn annually to tackle climate change but receives only $28bn a year.

He offered an example of the damage being done, saying “Climate change has devastated the Lake Chad Basin, affecting the livelihoods of millions of people and sparking serious conflicts between farmers and pastoralists.”

The African Development Bank and the Global Center on Adaptation have launched the African Adaptation Acceleration Program to mobilise $25bn for climate adaptation for Africa. But the need for wider investment by the international community and private investors remains pressing.

Net zero and beyond is an opportunity to create a better...